The Hirschen looks back on an eventful history. If you would like to know more about the history of the building and the Wehrli family, we would be happy to arrange a guided tour.

The Hirschen, a five-storey half-timbered building complete with a bay window, forms an ensemble together with its adjoining buildings, House Graf, the wine press, the two barns, and House Wyttenbach. This stately home is the visible and consciously designed expression of the family policy of the Wehrli dynasty of the city of Zurich which held important official positions for 220 years: from the end of the 16th till the beginning of the 19th centuries, family members represented the dominion of the monastery of St. Gall as senior and junior reeves, bailiffs, and country clerks in the Seebach and Stammer Valleys.

The history of the house begins in 1684 with the construction of the main building, the “Hirschen”, as a manor house with an estate farm by Johannes Wehrli (1643-1718). He built the house for himself and his wife, the mayor’s daughter Maria Magdalena Etzwiler (1641-1702) from Stein.

After his father’s death, Hans Peter Wehrli-Stockar (1676-1742) took over the property and, as a passionate farmer, looked after the estate. In 1730, he had the picturesque, three-storey bay window added to the gabled façade.

In the first half of the 18th century, the interior was furnished with important elements such as the painted Renaissance doors on the first floor showing subjects from the surrounding area such as the church of Unterstammheim or Schwandegg Castle near Waltalingen.

In 1943, after about 150 years in other people’s hands, Heinrich Wehrli-Naegeli together with two brothers of his acquired the “Hirschen” and, thus, returned it to its original family-owned property.

After various minor maintenance works from 1965 onwards, the owners installed a central-heating system in 1969. As part of this innovation, parts of the chimney, kitchen, and bath were added or renovated. The very same year, a smouldering fire destroyed the interior of the public room, which was subsequently rebuilt.

In 1978, after a thorough renovation of the exterior in 1976, the Hirschen was declared a listed building by the Federal and Cantonal authorities. In 1996, the Hirschen passed into the ownership of the Fritz Wehrli-Schindler family, who carefully and painstakingly restored the interior furnishings on all floors. 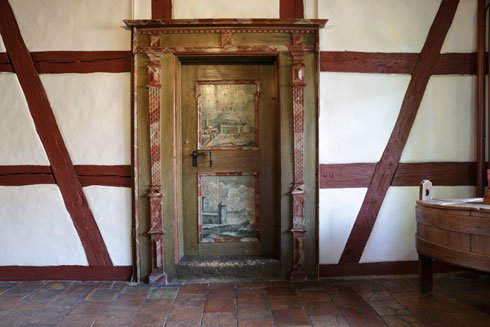 The decorative painting of the Renaissance doors on the 1st floor 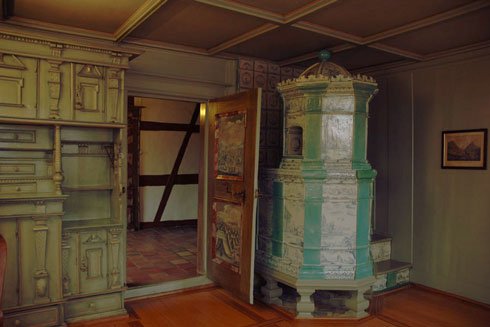 Detail of a historic tiled stove.

In 2013, ICOMOS Suisse (counselling a.o. UNESCO) awarded the Hirschen in Oberstammheim the distinction of “Historic Hotel of the Year 2014” justifying it with the following statement: The ”Gasthof zum Hirschen” in Oberstammheim is distinguished for its sensitive and continuous care of the historic inn. It is an authentically traditional house in an amazingly intact ensemble, with strong local roots.”

2015 till 2017, the entire ensemble was thoroughly renovated and added to in co-operation with the Cantonal Preservation of Historical Monuments authority. The inn was given a larger kitchen in the basement. The hayloft in the barn was converted into the Hirschenbühne, the Hirschen Stage, the former barn into a multipurpose hall. Among other things, modern horse stalls and a pellet heating system for the entire ensemble was installed in the large barn on the road. Finally, Wyttenbach House was completely renovated and now houses six hotel rooms, an open kitchen, a parlour, and a seminar room. Among other things, original, 16th-century wattle-and-daub wall was preserved as a special monument-preservation endeavour. In 2020, the entire ensemble was renovated.